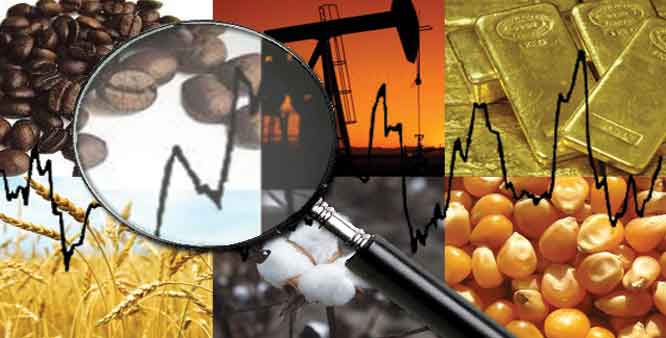 Bullions:  Gold prices inched up early Monday as the dollar hovered close to a 3.5-week low after US jobs data showed an increase in the unemployment rate and slower wage growth. The US economy created more jobs than expected in June, but steady wage gains pointed to moderate inflation pressures that should keep the Federal Reserve on a path of gradual interest rate increases this year.
The United States and China exchanged the first salvos in what could become a protracted trade war on Friday, slapping tariffs on $34 billion worth of each others’ goods and giving no sign of willingness to start talks aimed at a reaching a truce.
Gold was sold at a premium in India this week after a drop in domestic prices boosted demand, while buyers elsewhere in Asia were sidelined, waiting to see how the escalating trade tensions between the United States and China would evolve, traders said. Holdings of SPDR Gold Trust, the world’s largest gold-backed exchange-traded fund, fell 0.15 percent to 802.24 tonnes on Friday.
Spot gold was 0.2 percent higher at $1,256.85 an ounce & gold futures for August delivery were up 0.1 percent at $1,257.60 an ounce.

London copper snapped back sharply on Monday from near one-year lows hit in the session, as a weak dollar forced short holders to cover positions even amid simmering trade war tension. Copper rebounded on Friday from a fresh 11-month low, as some investors regard the recent sharp losses as exaggerated and believe the metal has hit bottom. London Metal Exchange copper rallied by 1.6 percent to $6,383.50 by 0108 GMT after prices slumped to $6,221.50 a tonne on Friday, which was the weakest since late July 2017. Shanghai Futures Exchange copper also rebounded, by 1.1 percent to 49,810 yuan ($7,502) a tonne. Wall Street has taken the China-U.S. tariffs enacted on Friday in its stride so far. Chinese alumina producer Luoyang Heungkong Wanji Aluminium Co Ltd said on Friday it has cut output of alumina by 680,000 tonnes on an annual basis, a day after state-run Chalco announced its own alumina cuts citing low prices. China’s broad economic growth was expected to ease to around 6.6 percent in the second half of this year, the State Information Center said on Saturday.LME aluminum rose 0.1 percent to finish at $2,080 a tonne after touching $2,071, the weakest since April 9, as Chinese alumina refiners cut production.LME nickel slipped 1.8 percent to $13,945 a tonne after touching $13,830, the weakest since May 11. Lead dropped 1 percent to close at $2,332 a tonne

Oil prices inched up in early Asian trading on Monday. “(Nonetheless) supply disruptions in Libya and Canada may put upward pressure on prices in the near-term,” ANZ said in a morning note. The United States and China exchanged the first salvos in what could become a protracted trade war on Friday, slapping tariffs on $34 billion worth of each others’ goods and giving no sign of willingness to start talks aimed at a reaching a truce, disruptions are giving some support with an outage at a major Canadian oil sands facility cutting regional supply. The stoppage at the 360,000 barrels per day (bpd) Syncrude facility in Canada has contributed to a sharp reduction in the discount for U.S. crude versus Brent crude over the past month. Official data that came out on Thursday, a day later than normal due to the July 4 public holiday, showed inventories at Cushing, the delivery point for U.S. crude futures, fell to their lowest in 3-1/2 years.